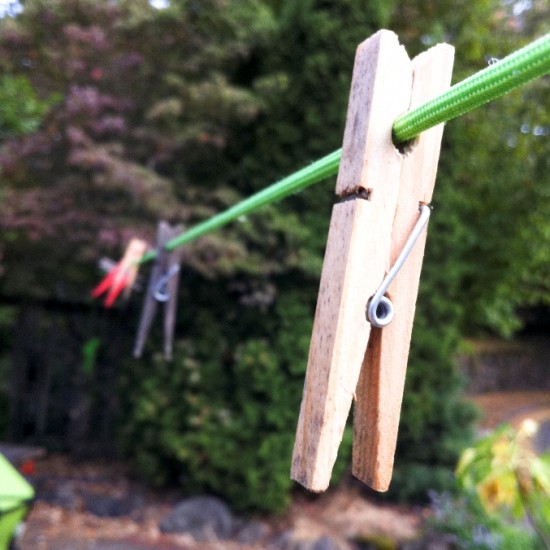 Author: Jon Howland
On February 21, 2012 at 3:00 pm
This article is part of the series Making Sustainability Legal

Editor’s note August 2022:Wow! This article continues to be a favorite with readers. Unfortunately we no longer research this issue and cannot offer legal guidance for those trying to, say, square HOA rules with state or local ones, though we encourage that you look into “solar collectors” policy and contact local electeds with your concerns. In addition, the map below is no longer functional despite multiple attempts at its revival. You can find more resources at HangDry.org and connect with the #HangDryWeek (August 21-–27, 2022) conversation on Twitter. Happy hang drying!

Editor’s Note 12/3/2019: We are experiencing some technical difficulties with the interactive map embedded in the article and are working to sort it out. We apologize for the inconvenience.
Editor’s Note 6/30/16:Warm weather is here, which means it’s time to set up your clothesline! But watch out: this simple green practice might be banned in your backyard. We’re bringing back this popular article just in time for summer. (Have you had trouble with your clothesline? Share your story in the comments below.)

As we and others have reported, hundreds of thousands of people across Cascadia—and tens of millions across the United States—live where homeowners associations (HOAs) or apartment or condo rules ban clotheslines. Clotheslines are a quintessentially sustainable tool that saves money, prolongs clothes’ lifespan, and reduces pollution. A “right-to-dry” movement has sprung up and won laws in six states (Florida, Colorado, Hawaii, Maine, Maryland, and Vermont) to render these bans void and unenforceable. In another 13 states, I have discovered to my surprise and delight that solar access laws already on the books appear to protect solar drying.

Yet in 19 of these states, illegal bans persist in community rule books such as HOA Covenants, Conditions, and Restrictions (CC&Rs) and a number that likely runs into the millions of residents do not know they have a right to dry. Solar access laws, many of them from the 1970s, and obscure amendments to state property law hardly fall in the category of common knowledge. When Sightline asked people to let us know about bans where they live, over a third of responses came from these 19 states.

The map below shows clothesline bans readers have notified us of along with ones that we have found. Blue pushpins indicate areas in states with clothesline bans and right-to-dry laws. Of the 220 bans marked on the map, 26 are in states that specifically void clothesline bans. Yellow pushpins mark bans (about 103) in states with solar access laws. Some 103 bans are in these states. Two green pins show bans in Utah, where individual land-use authorities may protect the right to dry. While laws in Delaware and New Jersey allow for roof-mounted solar energy systems and Washington law overrides bans on solar panels, these states and 27 others have no legal protections for solar energy in general or clotheslines specifically. These states (marked in red), the right to dry is not yet protected.

View a larger version of our map of clothesline bans.

A pillar of the Forest Heights marketing campaign is environmental stewardship: The HOA website boasts that the community has set aside more than a third of its acreage as common green space, complete with seven walking trails and a private pond. The HOA offers residents a shuttle service.

Yet in direct contradiction to the community’s green claims, the Forest Heights CC&Rs limit placement of clotheslines to “service yards” that are “completely screened so that the elements screened are not visible at any time from the street or any adjoining property.” This amounts to a de facto ban. The average lot is under a quarter-acre, and nearly all homes have two stories, so completely concealing a clothesline is virtually impossible. The ban is also illegal, rendered toothless by a 1979 Oregon Law that says any restrictions on “solar radiation as a source for heating, cooling or electrical energy” are “void and unenforceable.”

Clotheslines appear to fit under the umbrella of states’ solar rights because systems for hang-drying rely on the sun’s radiation to evaporate water in wet laundry. Clotheslines rely on solar energy, so their use is protected where laws provide blanket allowances for use of solar.

In addition to Oregon, solar access laws in Arizona, California, Illinois, Indiana, Louisiana, Massachusetts, Nevada, New Mexico, North Carolina, Texas, Virginia, and Wisconsin all delineate a homeowner’s right to install a “solar energy system,” “solar energy device,” “solar collector,” “system for obtaining solar energy,” or “solar energy collection device.” The legal terminology varies, but the letter and spirit of these laws has one overarching message: homeowners may utilize the power of the sun. 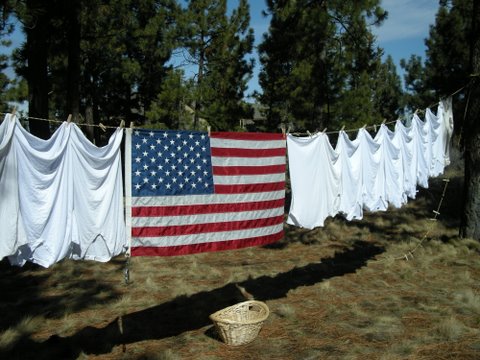 Across the United States, more than a quarter million HOAs govern upward of 60 million people. Alexander Lee, a champion of the right-to-dry movement, estimates that “more than half of them [HOAs] restrict or ban the clothesline.” If he is right, then tens of millions of Americans are subject to either full or partial clothesline bans. Some 19 states, including populous ones such as California, Florida, and Texas, have right-to-dry laws. These facts combined suggest that millions of Americans live under illegal clothesline bans.

So spread the word! If you live in any of the states listed below and HOA rules have hampered your hang drying, take heart: the law was on your side all along. When spring arrives, grab your clothespins and laundry basket, string up a line, and hang out the wash. If anyone hassles you, point to the relevant statute. The table below specifies the law and verse for each right-to-dry state.

If someone challenges you, the worst that could happen is that you might become part of a test case—a lawsuit that cements the right to dry in your state.

* Utah has clothesline-specific protections under the jurisdiction of some land-use authorities.

Like what you’re reading? Get free monthly roundups of Sightline latest research.