You'd never know this building in Albany, Oregon, has more than one home inside until you counted the mailboxes. Photo by Lua Edmonson, Soul Property Group, used with permission. 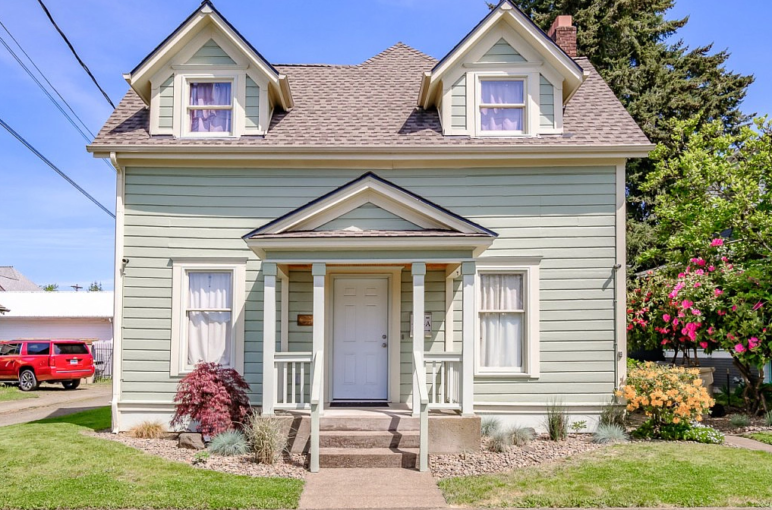 You'd never know this building in Albany, Oregon, has more than one home inside until you counted the mailboxes. Photo by Lua Edmonson, Soul Property Group, used with permission.

One of every six homes in Astoria, Oregon—a quaint, wind-whipped town of 9,862 that overlooks the mouth of the Columbia River—is part of a duplex, triplex or fourplex.

It’s the same in Talent, Oregon, population 6,492, along Bear Creek between Medford and Ashland.

Hood River, Madras, Grants Pass, St. Helens: all smaller cities around Oregon. All have more than 10 percent of their households living in duplexes, triplexes and fourplexes. On Thursday, Oregon Public Broadcasting’s flagship Think Out Loud program broadcast the most in-depth report yet on House Bill 2001, which would re-legalize duplexes or townhomes on every residential lot of Oregon cities with populations over 10,000, with additional provisions for triplexes and fourplexes in the Portland metro area and for cities over 25,000.

One of the several memorable interviews from the show is with Sharon Konopa, the mayor of Albany, Oregon—population 53,503. According to OPB’s Samantha Matsumoto and Dave Miller, Konopa sees the so-called “middle housing” proposal as “a Portland solution for the housing crunch.”

That’s a convenient story for the bill’s opponents to tell. But as the numbers in the chart above show, it’s simply not the case. In Albany, 10 percent of homes are currently provided by middle housing—exactly the same as in Portland.

“I think that in small towns we are very sensitive to solutions coming from Portland,” said Eleanor Ponomareff, a city councilor in Talent. “This is not one of them.”

In smaller towns, middle housing is the key to affordable rentals—which is why some people prefer it to be illegal in their neighborhood Unlike in bigger, richer cities like Portland, “middle housing” options in many smaller cities aren’t generally artifacts of history. More than a third of the duplex, triplex and fourplex homes in Konopa’s Albany have been built since 1980. In Ponomareff’s Talent, it’s 53 percent.

Why do smaller cities build so much middle housing? The same reason big cities would if it were still generally legal there: it’s less expensive. Just as in big cities, a duplex allows two households to share the cost of land. In a place like Albany, where more than a third of renter households make less than $25,000 a year, many people simply can’t afford the higher rents required to build and maintain a five-story apartment building or a freestanding house.

And as Konopa herself told OPB, the fact that middle housing is good for low-income renters is exactly why it would be politically difficult for her and other local elected officials in Albany to ever support a general legalization.

“If people live in a single-family neighborhood, they sort of rely on their government to protect their investment,” Mayor Konopa said. “A lot of people, whether we like it or not, do not like to be next to rentals.”

The result is a state full of zoning maps like Albany’s, which mostly concentrate duplexes and other middle housing into a few parts of town (marked in orange with the letters “RM”) while almost all other residential areas (marked in shades of yellow and green) mostly ban those choices: Zoning in Albany. In yellow areas, duplexes are allowed only on corners, and triplexes and fourplexes are illegal. Courtesy of the City of Albany.

Mayor Konopa is right: Many people do not want renters to live near them. And local politicians like Konopa may feel obliged to do what they want.

But Eleanor Ponomareff, who was elected to the city council in Talent last fall, says everyone is paying a cost for this status quo. Eleanor Ponomareff. Courtesy of the City of Talent.

“This is a really smart idea, to remove the ability for cities to ban duplexes,” Ponomareff said in an interview Friday. “This is something that is I think good for any town suffering from a housing crisis, and Talent has been really hard hit. The last statistic is that there’s a 1 or 2 percent vacancy rate, for example. And housing prices have been going up.”

Talent’s small population means that House Bill 2001 wouldn’t require it to change its zoning. But Talent is considering broad duplex legalization anyway—and some officials, including Ponomareff, back the statewide measure because they believe the duplex bans in most of Ashland and Medford affect their housing market, too.

“Our small city will benefit from this bill, in that larger towns in our area will be required to do their part to address the housing shortage,” Ponomareff wrote in February.

It’s likely that most bigger families will always prefer to pay the extra cost for bigger, freestanding homes. But no matter the size of your city, Ponomareff said, it doesn’t make sense to make freestanding homes mandatory anywhere.

“We are definitely moving away from that demographically, as a nation and even small towns,” Ponomareff said. “Seniors wanting to age in place, families being smaller, and certainly young working people on their own—they just don’t need all that space.”