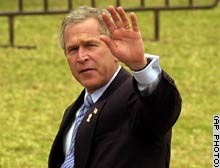 Yesterday, the Bush Administration grudgingly (by court order, in fact) released an updated summary of federal and independent research outlining large and harmful impacts already underway in the United States from human-caused global warming. Two big milestones here: 1) Human-caused. According to the LA Times, for the first time the White House “endorses what most scientific experts have long asserted: that greenhouse gases from fossil fuel combustion ‘are very likely the single largest cause’ of Earth’s warming”; 2) Climate fairness. The report spells out a clear case for the inordinately lopsided burden that will be borne by the nation’s lowest-income families and the poorest American communities.

Sharon Hays, deputy director of the White House Office of Science and Technology Policy, said the report did not represent a changed assessment but “a rolling up of a whole bunch of reports on the science, showing that climate change of the past 50 years is primarily caused by human activity.” (emphasis mine.)

As Andrew Revkin reports in his New York Times blog, Dot Earth, “the report included new projections of how the poor, elderly, and communities with lagging public health and public-works systems will face outsize health risks from warming.”

Milestones, indeed. But are we at a fork in the road? Let’s just flog the metaphor and say that US opinion polls indicate an uphill path ahead. Gallup numbers released this week showed an increasing partisan gap among Americans when it comes to opinions on climate change—especially whether or not humans have anything to do with it.

Up to now, we have politely referred to calcifying conservative foot-dragging on climate science and solutions as “skepticism.” Maybe more apt a term would be climate “denial.” (Local blogger David Goldstein noted on Seattle’s KUOW recently that calling these folks skeptics was an insult to the honorable art of skepticism). The fact is, even as majorities on both sides of the aisle now agree that there is scientific consensus that the climate is indeed changing (Dems, 70 percent; Repubs, 56 percent—up from 51 percent and 39 percent respectively in 1997)  – the new denial is to shirk any and all responsibility for the change, claiming humans and our pollution aren’t the cause:

According to Gallup (emphasis mine):

The percentage [of Republicans] believing that global warming is due more to “the effects of pollution from human activities” has declined by 10 percentage points, from 52 percent in 2003 to 42 percent in 2008. In contrast, Democrats have become slightly more likely to attribute global warming to human activities, with the percentage giving this response increasing from 68 percent to 73 percent over the same period.

Why the widening gap? In his comprehensive analysis of these trends (worth a read), Riley E. Dunlap, Regents Professor of Sociology at Oklahoma State University and Gallup Scholar for the Environment, points out that beginning in the 1990s—particularly in 1997, when the Kyoto Protocol calling for reduced CO2 emissions was established—conservative commentators such as Rush Limbaugh began to critique both the evidence for global warming and proposals for reducing carbon emissions. “It would appear that the vigorous conservative campaign against climate-change advocates (especially Al Gore),” he writes, “has contributed to leaders of the Republican Party adopting a highly skeptical view of global warming.”

But what happens now when the White House starts singing a new tune? And public opinion is a moving target in an election year. What changes when the (presumptive) leader of the party, John McCain, is talking climate solutions like cap and trade on the campaign trail? (Limbaugh’s hardcore Dittoheads and their ilk might not change their minds—they’re not crazy about McCain, after all, but fence-sitting Republican rank and file are likely to join their fellow Americans in putting debates and denial behind them and moving forward with responsible solutions.)