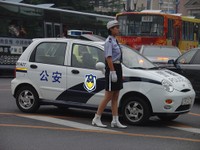 The days when emissions levels and energy policies in China and India were held up as excuses by the rest of the world’s economic leaders for doing nothing about climate and energy seem to be over—almost. (Some reasons why the China argument doesn’t pan out, here, here, and here—and here are some compelling reasons why climate solutions can be a boon to the economy rather than a strain.)

Today, in global talks, in the Senate, on the street, you still hear a murmur here and there about “not doing anything until India and China sign on.” And this previously pervasive attitude, however obsolete, may already be coming back to bite the long-industrialized nations of the West. Indeed, the big honchos in the West may find themselves borrowing and begging for new technologies that China has been busy perfecting all along.

Could it be that China is winning the clean energy race? Here are some tidbits gathered by MicCheck Radio and Sightline that make the case:

Some promising news: China and the United States recently announced a joint project to develop a clean energy research center. With initial financing of $15 million and headquarters in both countries, the center will focus on coal, clean buildings, and efficient vehicles, US Energy Secretary Steven Chu announced yesterday. Still, the race is on!

As Washington’s former governor, US Commerce Secretary Gary Locke, put it, “The Chinese are taking unprecedented action. They are a model for developing countries around the world.” But maybe they’re also a model for the developed countries.

Venture capitalist John Doerr, testifying before the US Senate, put it this way, referring to America’s place in the clean-energy race, “We barely got a dog in the fight, we’re barely in the game right now.”