Apparently, several unions in Vancouver, BC support a proposal to export more US coal to Asia. Which may strike some folks as odd, because coal companies in the Western US have been so deeply unsupportive of unions. 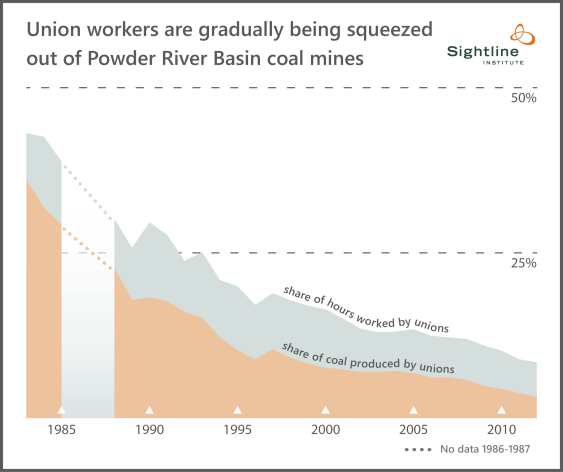 (All numbers for this chart come from the US Energy Information Administration’s historical coal production data series.)

Of the 16 mines operating in the Powder River Basin, only 3 remain unionized, according to the EIA. What’s more, all three of those mines are high-cost, low-volume ones—including mines where a fairly large share of the work is now reclaiming mined land, rather than producing coal. In fact, some market analysts expect one of those three mines to close in the next few years, which will drive down union participation in the Basin even further.

I’m no expert in the dynamics of labor relations in the Powder River Basin. But the numbers suggest, quite clearly, that the coal companies there have worked hard to lock unions out of the best, most productive mines. That spells bad news for the long-term survival of unions in the Basin—and raises questions about why unions in greater Vancouver are so supportive of companies that clearly have a poor track record of welcoming unions to their own operations.