Author: Clark Williams-Derry
(@ClarkWDerry) on May 2, 2014 at 6:30 am
This article is part of the series Coal Exports: Caveat Investor

It’s spring on Wall Street, the time when publicly traded companies announce their first quarter results. Just a few years back, coal companies loved the ritual: a bubble in international coal prices had industry execs crowing, their spirits bouyed by the bright prospects for coal exports.

But the coal industry reports today are much bleaker. International coal prices are in the dumps, profits are thin, companies are scaling back…and all those bold projections for a thriving US coal export business are looking more and more like foolish optimism.

For an example one need look no farther than Arch Coal, which runs the Black Thunder mine in Wyoming’s Powder River Basin—the second largest coal mine in North America. Arch’s earnings conference call last week mostly reconfirmed what its stock price already shows so clearly: as international coal prices tumbled, so did the company’s prospects.

But the earnings call did contain one genuinely new revelation: Arch execs admitted that the company will lose tens of millions of dollars this year on its coal export strategy. 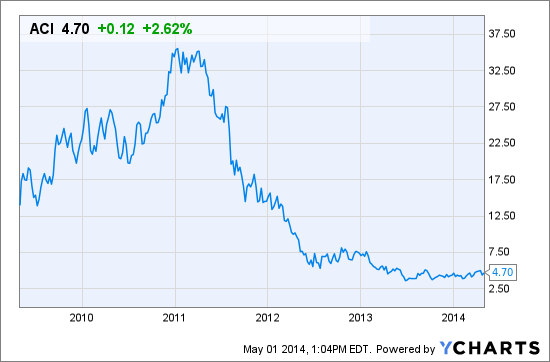 During the call, Arch’s CFO admitted that the company had cancelled many overseas shipments, instead choosing to pay $12.5 million in contractual penalties to rail companies and port operators in the first quarter alone:

[W]e incurred a charge of $12.5 million in the first quarter related to minimum obligations on various port and rail commitments…Given the prevailing weak prices in the seaborne market for both thermal and metallurgical coal we believe it is appropriate to incur these costs rather than move coal into over supplied markets. [Emphasis added.]

In short, Arch execs believe that the company will pay about $50 million in penalties to rail and port operators this year, just to avoid losing even more money shipping coal into a depressed international market.

It may seem strange that a coal company would have to pay such a stiff penalty for not shipping coal. But it’s not that unusual. Back when prices were high, many coal companies locked in “take-or-pay” contracts with rail and port companies—contracts that gave coal companies access to export facilities, but that imposed penalties on coal companies if they didn’t actually use the contracted port or rail capacity.

So Arch is now just paying a penalty for overconfidence about exports back when prices were high. And back in the day, Arch’s overconfidence in coal exports was rampant. Here’s just a sampling of quotes from old earnings calls, all from the Seeking Alpha website.

After that, though, things start getting uglier:

Even so, Arch’s management still insists that there’s a bright future in coal exports. But the numbers show, quite clearly, that Arch will consider itself lucky to only lose $50 million this year to back itself away from its ill-advised commitments to exporting coal.

Many thanks to Sightline Research Fellow Jerrell Whitehead for his assistance with this post.