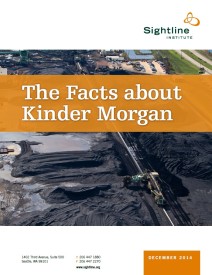 Energy giant Kinder Morgan has big ambitions. The firm aspires to multiply its coal export capacity in the Gulf Coast region even as it seeks permission to build a huge new oil pipeline in the Pacific Northwest. These projects could boost Kinder Morgan’s profits, but they also raise serious questions about what the projects might cost neighboring communities.

Today, Sightline Institute is publishing a new report, “The Facts about Kinder Morgan,” that examines the facts about the company’s behavior. The report reveals that the company’s track record is one of pollution, law-breaking, and cover-ups.

In public, Kinder Morgan points out that it is already operating coal export facilities in Virginia, South Carolina, Louisiana, and Texas. Or, as the company’s spokesperson said when the firm was pushing a failed coal export plan in Oregon, “What we’re proposing is not something we don’t already do.” And that’s exactly the problem.

The truth is that Kinder Morgan’s existing operations are well known for blighting neighborhoods and fouling rivers. Here are the facts: