Author: Kristin Eberhard
(@KristinEberhard) on September 13, 2017 at 6:30 am
This article is part of the series Archaic Election Methods Hurt Democracy

Author’s Note: This is the TL;DR version of a longer article that outlines nine options for electing Portland councilors from single-winner or multi-winner districts.

Portland has a problem—the city council is, and always has been, dominated by white men. Unfortunately, the most commonly discussed reform—splitting the city up into council districts or wards—will not actually solve this problem. What would solve it is to switch voting systems rather than district lines. By employing one of two widely used voting methods, where voters rank multiple candidates (ranked-choice voting) or allocate a set number of “dots” among those candidates in any pattern they like (cumulative voting), Portland can elect a council that is representative of its gender balance, racial and ethnic composition, ideological makeup, and geographic spread.

If Portland kept its (unusually small) council of five and elected four councilors from single-member districts and the mayor at-large, it could still end up with an all-white, all-male, ideologically homogenous council. Dividing the city into four equal-population districts might look like the map below; each district would range from 63 to 83 percent white. In each single-winner district, a candidate would have to win a majority. In Portland (as elsewhere in the United States), in majority-white districts, white male candidates most often win. Even if Portland increased the council to seven, electing six councilors from single-member districts and the mayor at-large, the same pattern would likely recur: an all-white, mostly male council. Dividing the city into six equal-population districts might look like the map below. Each district would range from 68 to 86 percent white, and each would have a good chance of electing a white man. A much better way to improve representation would be to change the voting method. With proportional representation, all candidates could run in a five-winner city-wide district and voters would be allowed to rank candidates (ranked-choice voting) or give all their votes to their favorite underdog (cumulative voting). The mayor could simply be the candidate with the most votes. Any candidate could win a seat on the council with as little as 17 percent of the city-wide vote. At least one and likely two candidates of color would probably win a seat on the council. Candidates of color and younger candidates would have a further advantage under this system because all city elections would be conducted in high-turnout presidential elections. Primaries could disappear. 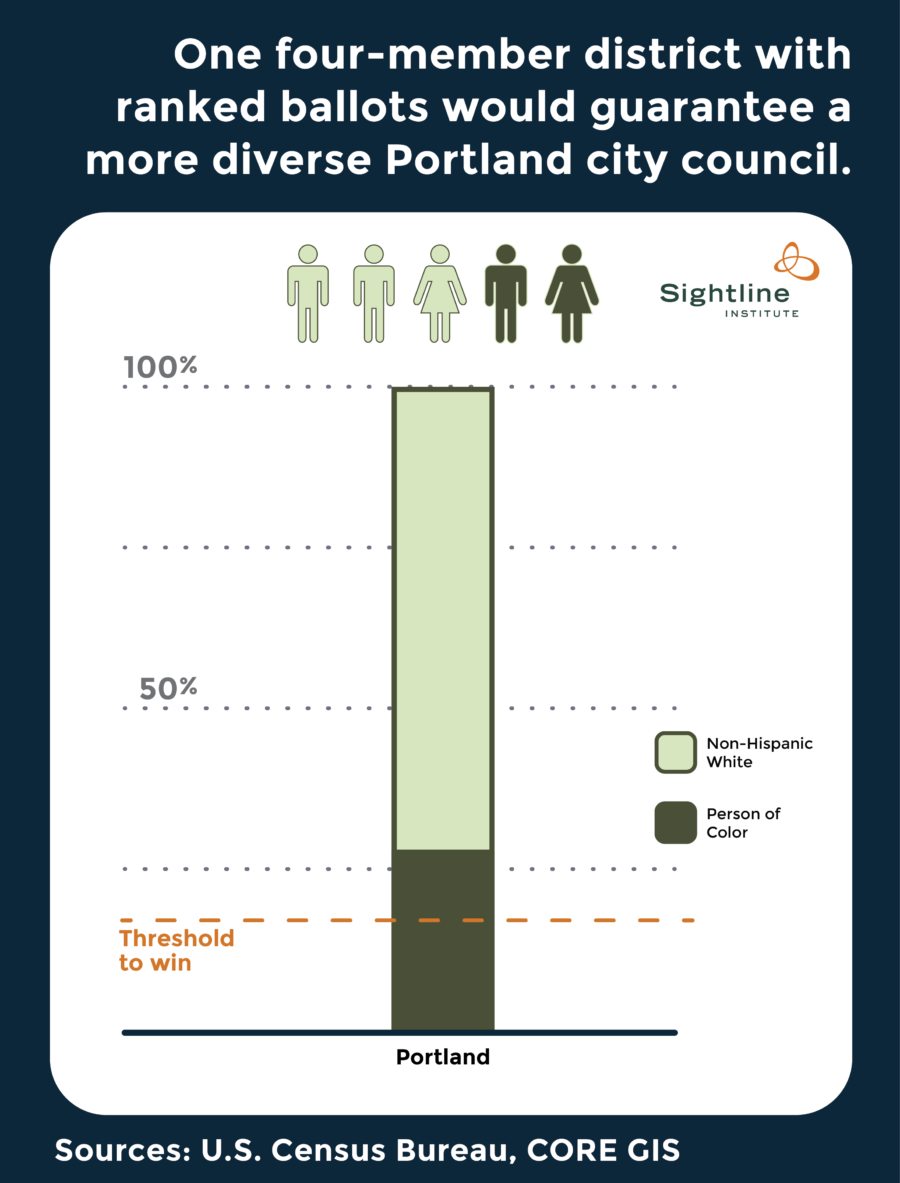 To guarantee geographic diversity as well as gender and racial/ethnic diversity, Portland could split into two districts, as shown below. In each district, voters would have the chance to elect three councilors with ranked or cumulative ballots. The threshold to win would be 25 percent in each district. The North-East district would be 37 percent people of color. If the bulk of those voters generally voted together, a multi-member proportional election there could easily deliver at least one candidate of color. The West-Southeast district would be 19 percent people of color, so a candidate of color could win by gaining support from those voters plus just six percent of white voters. Proportional representation will give more Portlanders a voice