Telework during the coronavirus lockdown. 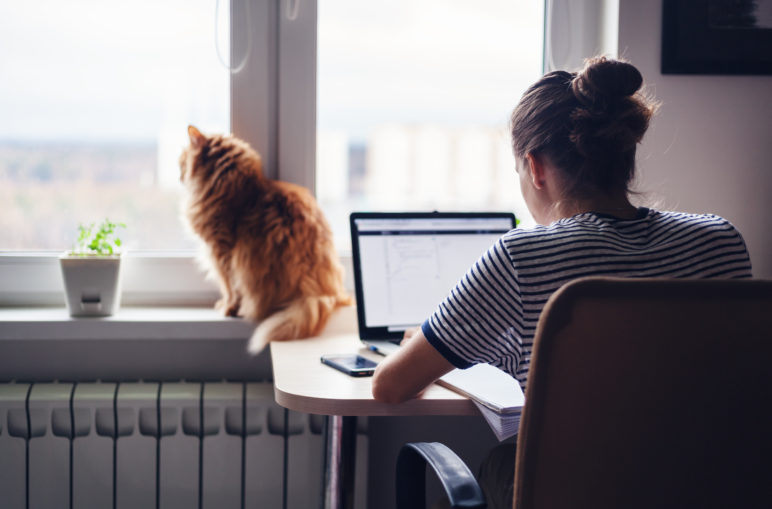 Telework during the coronavirus lockdown.

Author: Daniel Malarkey
(@djmalark) on May 15, 2020 at 6:12 am
This article is part of the series Coronavirus and Cascadia

The demands of social distancing have caused an unprecedented substitution of virtual interactions for physical travel. Surveys by MIT and Data for Progress found that by the end of March, more than a third of US workers had switched to working remotely. In addition, half of physicians have adopted telehealth to deliver patient care. Many employers expect these changes to endure even after distancing guidelines relax, which—if the region makes the right moves—could wrest from this crisis some lasting progress for Cascadia’s roads and skies.

The scale and speed of the shift to telework is staggering. Zoom, a digital conferencing services provider (whose name has become a buzzword of the lockdowns), saw its active users jump from 10 million to 200 million. Satya Nadella, CEO of Microsoft, reported a sixtyfold increase in the use of Microsoft Teams, the company’s online collaboration tool. Amid the public health crisis and economic devastation, technology has allowed parts of social and economic life to carry on.

But many aspects of economic life can’t go online, as evidenced by the breathtaking loss of at least 30 million US jobs in just five weeks—a scale of unemployment matched only by the Great Depression. Collectively, Idaho, Oregon, and Washington have lost more than 1 million jobs in that same period—losses that disproportionately affect Cascadia’s most vulnerable people. The coronavirus has amplified the already cruel inequalities in our society.

The Data for Progress survey from the end of March shows unequal adoption rates for work-from-home by income and education. Among high-income workers, 56 percent moved online while just 25 percent of low-income workers were able to make the switch. Because more high-income workers could work remotely, they were less likely to lose their jobs. While the official unemployment rate for April was an alarming 15 percent, nearly 40 percent of households earning less than $40,000 per year had lost a job according to the Federal Reserve.

There are no silver linings for people suffering from illness, death, loss of income, and the gnawing uncertainty of what will happen next. And yet forward-looking responses to the immediate public health and economic crisis could lay the foundation for a more equitable and environmentally sustainable economy in the next decade. A durable shift to remote work could help enable a more sustainable future if organizations make productive use of telepresence technologies part of the new normal.

Let’s look at what’s happened to work in technology and medicine in response to COVID-19 and, with those examples in mind, consider how a more permanent substitution of telepresence for many face-to-face meetings could alter future travel demand.

Cascadia’s technology companies were among the first in North America to recommend and then require their employees to work from home. Amazon, Microsoft, T-Mobile, and the Pacific Northwest outposts of Facebook and Google all initiated work-from-home policies at the beginning of March. Since then, these enterprises have sustained and even expanded their businesses while most of their employees work from home.

In the midst of the pandemic, T-Mobile completed its acquisition of Sprint on April 1 and kicked off plans to invest $40 billion in wireless communication infrastructure over the next three years. Remote workers at Microsoft supported massive growth in the use of its cloud software platforms; the company now plans for all of its major events in 2020 to happen online. Amazon has supported a flood of new demand for its e-commerce services and started hiring an additional 100,000 workers. Even with a drastic reduction in face-to-face meetings, big tech companies have functioned at a high level, serving a new demand that’s helped raise their stock prices.

It’s not only high-income workers making the shift. By the end of March, T-Mobile had transitioned nearly 15,000 domestic and international customer service workers from densely packed call centers to their homes. By early April, all 17 of T-Mobile’s internal call centers had transitioned to home-based work.

Amazon’s hiring binge for additional warehouse workers makes clear that key aspects of the technology economy must occur outside the home, in conditions that can threaten worker safety. Indeed, the pandemic compounds existing inequities between white collar workers and those with jobs deemed “essential”—that can’t be done from home. But, concern over Amazon’s corporate behavior have prompted new alliances among workers to advocate for improved warehouse conditions and a reduction in Amazon’s environmental footprint. And whether it is labor organizing, delivering cell service, or building capacity to host more video conferences, people in tech now accomplish far more of their work remotely.

The rapid embrace of remote work and virtual medicine offers some hope that post-pandemic, Cascadia could see a reduced demand for road space from autos and corresponding reductions in greenhouse gas emissions.

By early May, Amazon and Microsoft had extended their work-from-home policy to at least October. Some tech companies, like Twitter, are going a step further and making work-from-home permanent. Across the country, employers now look to extend telework into the foreseeable future. In New York City the three largest commercial office tenants in Manhattan plan to reduce their leased office space as they adopt long-term work-from-home policies.  A survey of 400 downtown Seattle businesses shows that a majority plan to delay a full return to work, stagger shifts or permanently adopt work-from-home.

A close-to-my-heart example: my niece leads a Seattle start-up company building cloud-based software solutions for the real estate industry. Following the example of Seattle’s tech giants, her company went fully remote in the beginning of March. After four weeks, she polled her staff and discovered a large majority preferred working at home. She plans to slash her office expenses and find lower cost venues for face-to-face meetings in the future when they are required for the business and allowed by public health authorities. One month of remote work proved they could be as or more productive as a virtual company, reduce overhead, and save her staff the stress, time, and expense of daily commuting.

The doctor will see you now—on a computer screen

It’s not just office work that has changed. To lower the risk of infection for medical personnel, patients, and their families, health care has gone virtual. Remote interactions with medical staff help keep people at home, limiting the spread of the virus and preserving capacity in medical facilities for COVID-19 patients. Reports from San Francisco, Chicago, and the United Kingdom all describe the rapid adoption of telemedicine (“ten years of change in one week”) and how doctors have come to appreciate some of the benefits of meeting with patients virtually.

The reports also describe situations where virtual connections are a pitiful substitute. Terminally ill patients, isolated in hospitals because of the virus, must say their goodbyes over the phone without a final touch or hug, compounding the tragedy. But for some routine appointments, telemedicine allows for as good or better care at a lower cost.

Patients like the convenience of telemedicine, and industry observers expect that habits developed during the pandemic will grow into preferences and default behaviors. A 2015 survey of patients of a telemedicine service offered by CVS found that the large majority was satisfied with the experience, and a third preferred it to an in-person meeting. A report from Mass General in January 2020 found strong support among patients for telemedicine as an alternative to in-office visits. Dr. Lee Schwamm, director of the MGH Center for TeleHealth, uses virtual video visits extensively in his own practice.

“What patients’ value most is uninterrupted time with their doctor, and they put up with all the other challenges required to come see us,” he says. “Telehealth gives them more of what they want most and gets rid of the stuff they don’t want. With a telehealth visit, 95 percent of the time spent by the patient is face-to-face with the doctor, compared to less than 20 percent of a traditional visit, in which most time is spent traveling and waiting.”

Before the pandemic, telemedicine faced obstacles from both insurers and doctors. That changed on March 6, when Medicare agreed to pay for telemedicine at the same rate as in-person visits. Previously, Medicare had strict requirements for telehealth, allowing it only for patients who live in rural areas and requiring them to travel to a local medical facility to conduct a virtual visit. Patients generally could not receive such services in their home. Once the federal programs agreed to pay for telemedicine, private insurance companies such as Aetna and BlueCross BlueShield waived copays until at least June.

Doctors whose training and work experience had been exclusively “hands-on” have had to shift long standing practices to adopt new approaches suited to telemedicine. Physical distancing requirements have been a catalyst for medical enterprises to make permanent changes to their processes that take advantage of new technologies in ways that lower costs and improve or expand care.

That could mean more convenient access to health care for patients and lower costs for medical enterprises. From a transportation perspective, shifting some care to telemedicine will result in fewer car trips for medical appointments. While health care represents 17 percent of the US economy, trips for medical services are not a huge share of all trips. (In the Puget Sound area, travel for medical services is something less than 10 percent of all travel.) Nonetheless, an accumulation of small changes in the timing and duration of trips for work and medical care could lead to big changes in the performance of our road and transit systems.

We can’t know how travel behavior will change once the rules and habits of social distancing are relaxed. Certainly, employers and employees will make some permanent shifts to telework options, but only time will tell the full scope of the changes. Matthew Kitchen, an expert in transportation economics at ECONorthwest observes that a surge in telecommuting will cause individuals to reassess a host of other daily travel decisions:

We’ll have to wait until the economy is moving again to know how travelers will respond to these questions. All we know for sure is that the coronavirus will stir up a new mix of travel modes, routes, and timing that will look different than they did before. The rapid embrace of remote work and virtual medicine offers some hope that post-pandemic, Cascadia could see a reduced demand for road space from autos and corresponding reductions in greenhouse gas emissions.

While there’s unequal access to remote work, there may be shared benefits of reduced congestion and pollution for those who do need to use the roads, like workers in restaurants, childcare, health care, warehouses, and grocery stores. Less congestion can make necessary vehicle trips more efficient, saving some time and money for workers without the luxury to telecommute. And pollution reductions can equate to health benefits for everyone.

Over this next year, employers have the opportunity to figure out best practices for telecommuting that will serve their mission as well as reduce environmental impacts. If we use this time to explore new ways to operate our economy that don’t require as much travel, we may find ourselves in a future with less congestion, less air pollution, and more time for each other.