The mothers in the Sightline study tell why they were tested for PBDEs and what they think should be done about the problem of toxics in humans.

The mothers in the Sightline study tell why they were tested for PBDEs and what they think should be done about the problem of toxics in humans.

In 2004 and 2005, Sightline, with a cadre of committed partner organizations, published an ambitious study of a troubling new PCB-like toxic that was appearing in the breastmilk of Northwest mothers, PBDEs. The study, which received wide attention from media and policymakers region-wide, was the first regionally to document the dramatic surge in PBDEs in northwesterners, and helped spur passage of strong phase-outs of the chemicals in Oregon and Washington between 2005 and 2007. Here are the stories of the  most important people involved with the study–the mothers.

The 40 mothers who participated in Sightline’s study of toxics in northwesterners are a varied group: They live all over the Pacific Northwest–from Missoula, Montana, to Portland, Oregon, to Surrey, British Columbia. Some work outside the home–in fields ranging from auto mechanics to law–and some are stay-at-home mothers. What they have in common is a curiosity and commitment to issues that affect their communities and their families.

Here are a few of their stories. And we extend our deep gratitude to all of them for participating in the study!

Laura Gerber and Else, Seattle, WA Because Laura, a recent graduate of the University of Washington School of Law and the Evans School for Public Affairs, is healthy and eats well, Gerber believed she and her daughter Else were well-protected against contaminants. So when Gerber received her results last February, and found that her levels of PBDEs were relatively high, she was understandably upset.

“I was really, really angry,” Gerber told a reporter who interviewed her about the study. “I try to be careful about what I bring into our home-but somehow, unbeknownst to me, my body fat has been filled with flame retardants.”

Gerber’s experience underlines two important points: First, exposure to PBDEs and other persisent chemicals isn’t optional. PBDEs, which have been detected in everything from Puget Sound orcas to supermarket food, are so prevalent that residents may be exposed to the compounds by handling consumer products, or by inhaling dust, as well as through food. And second, the most effective method of reducing the risk of exposure is to stop pollution at the source and encourage industry to use alternatives.

This is a cause that Laura has made a personal commitment to. In the spring of 2004, she helped Washington Toxics Coalition lobby state lawmakers for a phase out of PBDEs; in September, Laura also testified at a hearing on the state’s new draft PBDE action plan. “Once I had the information about what was in my body, I couldn’t ignore it and go on with my life,” says Gerber. “I felt like I had to do something. It wasn’t a choice.” 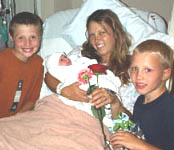 Kina with the Kuhn kids

Kina Kuhn, 30 years old, thought she would be a good candidate for the Sightline study because she’s lived in the same environment for most of her life. She was born and raised in Missoula, and she and her family still live in the same house that she grew up in.

“We also didn’t eat a lot of chemically processed meat while I was growing up,” says Kina, who works for a telephone company in Missoula. Her father was an avid hunter, and the family ate a lot of elk and deer.

Kina was surprised that her PBDE levels–like those of other moms who were tested–were much higher than those detected in European studies. She hopes that the lesson to governments is that chemicals need to be well-studied for potential effects before they are used commercially. She also hopes that mothers will understand that breastfeeding is part of the solution. Kina continued to breastfeed her daughter Kennedy-who’s “very healthy”–until she was six months old.

Allison Wykhuis and Paloma, Portland, OR Allison Wykhuis, a small business owner, participated in the Sightline study out of curiosity after her lactation consultant mentioned it to her. Like many of the moms in the study, she was disconcerted when she received her results-and wondered what the long-term effects could be for herself and for her now one-year-old daughter Paloma. She knows that without regulation and guidelines for consumers, she wasn’t given the option of avoiding exposure. Allison continues to breastfeed Paloma, pictured here at the Portland Zoo. Alexis found out about the NEw study through a friend who saw an ad in the newspaper. “I became even more interested in it after speaking to Marcia [the lactation consultant who coordinated the study], she says. “I liked that it was related to the environment.”

She managed to fit her participation into an already busy life. Dedicated to her family and volunteer work, Alexis currently works full-time at the Jewish Community Center of Greater Vancouver as Director of Membership and Facility Rentals; her husband, Jeff, owns his own company, specializing in home alarm sales.

Ethan, now 14 months old, is in daycare 3 days a week and is with Alexis’ parents on the other two days. “Ethan loves day care,” she says. “He’s very bright and curious, and loves socializing.” At 18 months, Ethan will be eligible to attend the daycare at the JCC, where Alexis works–which she is thrilled about. “There aren’t many workplaces where mom and child are under the same roof,” she says.

As far as the study results, Alexis thinks Canada should consider following the lead of the European Union, which has banned PBDEs. “Canada should start following that pattern. I would like to see those kinds of toxins eliminated. I’ve brought a new person in the world and I want what’s best for him.”

Tammi Keller and Jasmyne, Portland, OR

When Tammi Keller, a school bus driver, found out she had high levels of PBDEs in her body, she wondered if the benefits of using those chemicals as flame retardants could really outweigh the potential dangers of having them in her body–especially when alternatives to PBDEs are available. “By breastfeeding, I’m giving my daughter Jasmyne what I know is best for her,” she says. “But because of the presence of these chemicals, the best food, breastmilk, isn’t as perfect as it should be.” Tammi would like to see consumers given the option of knowing which chemicals they come in contact with. “It was really interesting to find out that every woman in the Sightline study was found to have PBDEs,” says Andrea Riseden-Perry, a graphic designer who works at home and cares for her 16-month-old daughter, Aspen. “It shows the difference between the United States and Europe–in Europe, public safety comes first.”

Since the study Andrea has made some changes to her family’s diet, adding in more organic vegetables, meats, and fish. One thing that she hasn’t changed is that she’s still breastfeeding her daughter. “The problem is not with breastfeeding,” she says. “The problem is with our approach to chemicals. Studies on chemicals should be done up front. And if there’s a risk it shouldn’t be released.”