Author: Eric de Place and John Abbotts
(@Eric_deP) on October 15, 2013 at 9:06 am
This article is part of the series The Wrong Side of the Tracks

The Northwest has lately been inundated with plans to ship huge volumes of coal and oil on trains to ports and refineries. To demonstrate the impact that these rail shipments would have on the region, Sightline is analyzing places where rail lines intersect public streets in communities along the main railway route from interior to the coast.

In this chapter of our series, we examine localities in southwest Washington from Vancouver to Centralia. The fossil fuel industry’s plans are so massive that simple math shows that the shipments would close streets and roads for hours each day as trains pass through at-grade crossings. In southwest Washington south of Longview, we estimate that coal and oil trains would shut down every at-grade street and road crossing every day from 1 hour and 29 minutes to 3 hours and 20 minutes, on average, if all the plans were built and operated at full capacity. North of Longview, we assume that the rail lines will not be clogged by the loaded or empty coal trains serving the large coal port proposed for that town, so between Longview and Centralia we estimate daily street closure times of between 58 minutes to 2 hours and 10 minutes. These figures are in addition to current closures from trains.

It is important to note that our analysis here is as a series of case studies, not a complete account of street closures from coal and oil trains. The city of Ridgefield contains two BNSF public grade crossings, one at Mill Street to the south and one at Division Street to the north. Each is protected by gates and each currently sees 48 trains per day. The Mill Street crossing is used by 1,200 vehicles on an average day. Union Ridge Elementary School and View Ridge Middle School can be seen a few blocks east of the crossings. As in Ridgefield, the street-rail crossings in Woodland are protected by gates and are used by 48 trains daily. Davidson Avenue, the busier of the two streets, handles 1,410 cars a day. Woodland Primary School and the athletic fields for Woodland Middle School and Woodland High School lie just to the east of the tracks between the crossings.

Further north, the city of Kalama is separated from the Columbia River by the train tracks. North Hendrickson Drive sees little traffic. Vehicles are warned about passing trains only by a “crossbuck” road sign. A “children crossing” icon to the east of the tracks designates Kalama Middle/High School and its nearby athletic field. The image above shows the port area of Longview, where coal trains could be expected to maneuver as they offload their cargoes. Future rail traffic is uncertain, but several BNSF public grade crossings lie within the city, of which two with high vehicular traffic are indicated here. Each is protected by gates and each sees a large number of cars—at least 14,000 on a daily basis. Athletic fields are visible just northwest of the Industrial Way crossing.

Longview is home to the planned Millennium Bulk Terminals that would move 44 million metric tons of coal annually, an operation that would require an estimated 9 loaded and 9 unloaded trains per day. For the purposes of this analysis, we assume that empty coal trains would depart Longview heading south and retrace their steps back to the Powder River Basin. Because the proposed Longview coal terminal is so large, we calculate that traffic disruption, while still very meaningful, will be noticeably less intense to the north.

The coal and oil trains that continue past Longview reach the neighboring community of Kelso. Both of Kelso’s at-grade rail crossings see 46 trains passing through daily, and both are protected by gates though neither street is used by a large number of vehicles. To the east of the rail line is Wallace Elementary School (marked with a “children crossing” icon) and the Kelso Public Library (a book icon).

Further north in Cowlitz County, Castle Rock sits to the west of the railroad tracks. The Cowlitz Street crossing is shared by about 40 trains and 400 vehicles each day. It is protected by gates. Castle Rock Elementary and Middle School are visible to the southwest. In Vader, SR 506 is used by about 2,200 vehicles daily, which are protected from the railway’s 40 daily trains by gates. Vader Elementary School is visible to the east of the crossing.

North of Vader, trains pass through another small town, Winlock. 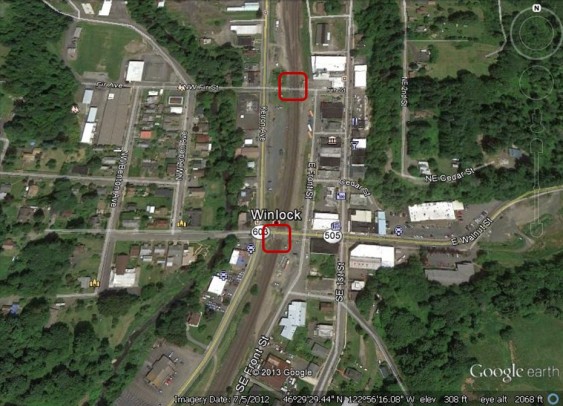 Continuing along the rail line north is Napavine. Each day, 40 trains pass through Napavine, closing off Washington Street, which handles 2,050 vehicles daily. The red roofs of Napavine Grade School and Napavine High School are visible just to the east of the tracks.

Further north is Chehalis, one of the more populous communities in southwest Washington. Each of the four public at-grade crossings in Chehalis is protected by gates and, as in the towns to the south, these crossings see 40 trains per day. The busiest of these crossings is Main Street, with average daily traffic of 5,540 vehicles.

Proceeding north, trains comes to the town of Centralia. As to the south, 40 trains pass through daily and each of Centralia’s five at-grade crossings is protected by gates. The highest vehicle traffic is at Floral Street where 2,500 average vehicles cross the rail tracks daily. Jefferson Lincoln Elementary School lies west of the Summa Street crossing; Centralia College, indicated by a mortarboard icon, lies west of the Locust Street crossing.

From Centralia, the BNSF mainline continues north and northeast into Thurston County, while a spur line heads west toward Grays Harbor. If the planned crude oil-by-rail facilities are built and operated at the Port of Grays Harbor these oil trains will diverge from the rest of the fossil fuel trains, which will continue north.

In our next installment, we will examine rail crossings in the vicinity of Olympia and Tacoma.