In recent years, the Northwest has seen a raft of proposals to use trains to transport coal to export terminals and crude oil to refineries and ports. To better illustrate the effects of the plans, Sightline is analyzing rail crossings from Sandpoint, Idaho to Cherry Point, Washington in a special series, The Wrong Side of the Tracks. Large-scale rail shipping of coal and oil presents a basic physical challenge to the region’s infrastructure. The volume of cargo and the speed of the trains together dictate that coal and oil movements could shut down each street crossing for hours a day as the trains pass over public streets and roads. 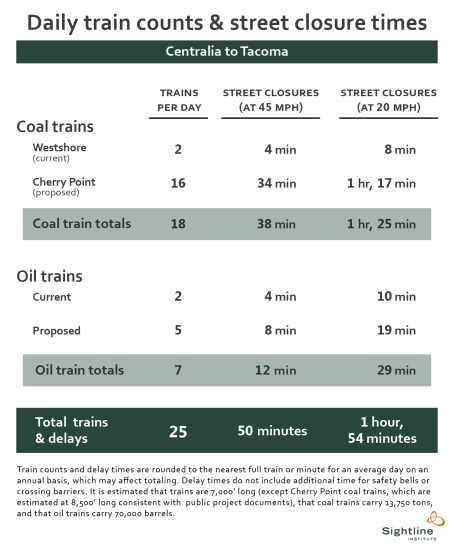 In Thurston and Pierce Counties, the region around Olympia and Tacoma, we estimate that coal and oil trains would shut down streets and roads every day from 50 minutes to 1 hour and 54 minutes, on average, if all the plans were built and operated at full capacity. That’s over and above current street closures from trains.

Please note that our analysis is not a complete account of street closures, but rather a set of examples of public at-grade crossings that would be impacted by coal and oil trains.

In our last installment, we examined street-rail interfaces in southwest Washington from Vancouver to Centralia. In this chapter we look at the next leg of the journey as trains roll into Thurston County and reach the town of Bucoda. Forty-two trains currently pass through the town of Bucoda daily. Gates protect 6th Street and its 1,400 vehicles from rail traffic. Bucoda Volunteer Park is marked by a green pine icon in the southeast portion of town. North of Tenino, 143rd Avenue SE intersects the BNSF mainline and its 42 daily trains. The crossing is protected by gates to manage the 1,350 vehicles that travel over it each day. Near the town center are icons showing Tenino Middle School and Tenino Elementary School. The high school is located near the baseball diamond to the east of the tracks.

Continuing north, trains arrive at Lacey and the southern edge of the Puget Sound metropolitan region. Coal and oil trains are expected to travel east of Olympia through Lacey where they will cross Pattison Lake on a causeway before encountering two at-grade street crossings and passing near the shore of Long Lake. Both crossings are protected by gates and currently see 40 trains a day. Marvin Road, the busier of the two streets, is traveled by 3,860 vehicles per day. Continuing into Pierce County, coal and oil trains will travel along Puget Sound beaches to reach Steilacoom and the gated at-grade crossing at Union Avenue. Union Avenue carries 14,500 vehicles per day, most of them to or from the ferry dock that provides access to Anderson Island, McNeil Island, and Ketron Island. [Ed. note: Please see the comment below by Ann Dasch for more information about this crossing.] The crossing is currently traveled by 46 trains per day, a number that would swell dramatically if planned coal and oil shipments are realized. “Child crossing” icons represent Saltars Point Elementary School, Cherrydale Elementary School, and Lake High School. Each day, 46 trains pass through the University Place crossings that give cars access to the marina and waterfront. The highest street traffic is at 19th Street, with 7,090 average daily vehicles. In the south of this image, a “children crossing” icon just north of the University Place label represents Happy Days Day Care, while the pacifier icon represents the ABC Children’s Center.

Further along Puget Sound, trains round off Point Defiance in a tunnel and turn south to arrive at the city of Tacoma. Multiple public grade crossings lie within Tacoma, but two with high train traffic are at McCarver Street (55 trains and 4,240 vehicles per day) and East 22nd Street (50 trains). Both are protected by gates. The green icon between the markers for State Route 705 and Interstate 5 marks the location of the Tacoma Dome.

In urban areas like Tacoma, our estimates of street closure times are almost certainly very conservative because trains must travel more slowly, and are more likely to come to a full stop on the tracks. It’s a risk that will be even more likely in King County, which we will explore in the next chapter of this series.